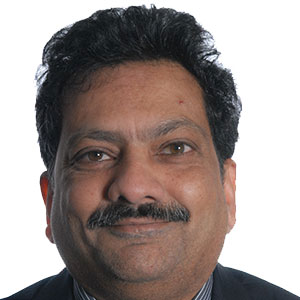 
Shrin Honap believes Non-Executive Directors should bring one key element to a Board and that is ‘curiosity’.

Shrin is a chartered accountant by profession and has held a number of executive and non-executive roles across a range of industries, including Vodafone and Capita, focusing on transformation, programme management and governance.

He brings an all-round understanding to Registers of Scotland of how transformation works and believes staff engagement is key to achieving goals.

Shrin was one of the first employees of the successful Internet challenger bank, Egg. He is also a Non-Executive Director at the British Transport Police and Driver and Vehicle Standards Agency, as well as the committee which looks at the setting of budgets for MP’s expenses.

He adds that the most interesting fact he has learned about Registers of Scotland is that “the organisation holds registers that go back 400 years and it’s a living history of Scotland”.