Registers of Scotland (RoS) releases its updated land and property titles in Scotland by country of origin publication.

This publication accompanies the update of the overseas company report – a dataset containing information about all properties owned or leased in Scotland by overseas companies – and presents statistics on the country of origin of purchasers in Scotland.

The statistics are based on identifiable titles on the land register of Scotland, as at 30 June 2018, where the registered legal owner (or the tenant under a long term commercial lease) has provided an address outside of Scotland at the time of the registration of the purchase.

RoS business development and information director Kenny Crawford said: “This is the second publication in our titles by country of origin series. Our first publication was well received and was a welcome addition to our data provision, enabling access to this type of information from RoS for the first time. As this report continues to evolve and develop, we will be better placed to identify emerging trends. We look forward to supporting wider analysis in this area in future.”

Of the 1.54 million titles registered on the Land Register as at 30th June 2018, whether residential or non-residential, 7.0% (108,621 titles) related to titles for which one or more of the registered owners (buyers or tenants) had an identifiable address outside Scotland. This represents almost no change (an increase of 0.1 percentage points) to the previously released figures in the previous publication, which contained data as at 31 December 2017.

The breakdown of these owner/tenant addresses, as at time of registration, and a comparison to the previous figures for December 2017 are shown below:

With respect to the 15,730 titles in Scotland for which one or more of the registered buyers or tenants had an identifiable address outside of the UK at the time of purchase (including UK overseas territories), 83.5 per cent of the proprietors were individuals, 11.6 per cent were overseas companies, 4.6 per cent were other legal entities, such as partnerships and trusts, and 0.3 per cent were mixed ownership between companies, other legal entities and individuals, as demonstrated in the chart below. These proportions remain largely unchanged when compared to the figures in December 2017. 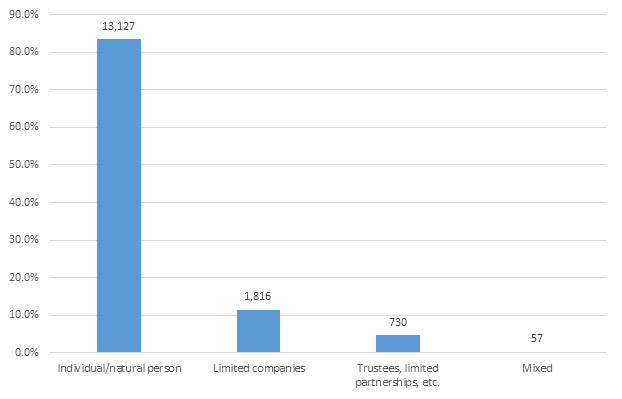 Registered buyers and tenants originate from 153 countries around the world. The top 10 countries by the origin of the purchaser/tenant are shown in the Table 1 below. As was the case in December 2017, more companies purchasing or leasing in Scotland came from Jersey than anywhere else, while USA was the most common country for individuals. The order by volume of the other countries remains largely unchanged when compared with December 2017, with only minor shifts in position.

More than half (53.6%) of all titles owned or leased by companies from outwith the UK were accounted for by 4 countries: Jersey, Isle of Man, British Virgin Islands and Guernsey.

Of the 15,730 titles in Scotland for which one or more of the registered buyers or tenants had an address outside of the UK at the time of purchase, 83.6 per cent, or 13,139 titles, related to ownership while the remaining 16.4 per cent, or 2,579 titles, related to tenancy under long-term commercial leases. These proportions are largely unchanged since December 2017.

With regard to the absolute number of titles, Renfrewshire is the most popular area of Scotland for purchasers/tenants from abroad to buy or lease, equating to almost one in five titles or 18.0 per cent of the overseas title holdings. However, it is thought that some of these holdings may relate to very small parcels of land such as parking spaces and storage facilities near to Glasgow airport, although further research would be required to establish further details on this. A large proportion (83.1 per cent) of the Renfrewshire titles relate to commercial leases. The next most popular areas are Fife (7.8 per cent of the holdings), the City of Edinburgh (6.9 per cent), Highland (6.4 per cent) and Glasgow City (5.5 per cent).

View and download the full land and property titles in Scotland by country of origin, as at 30 June 2018, statistical report and further information about the overseas company report, what it contains and what it costs are available in our information sheet.